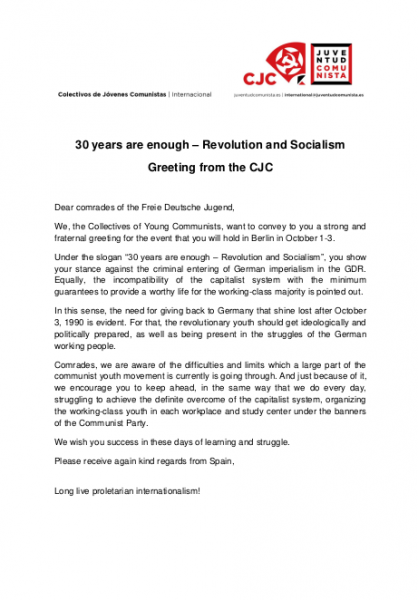 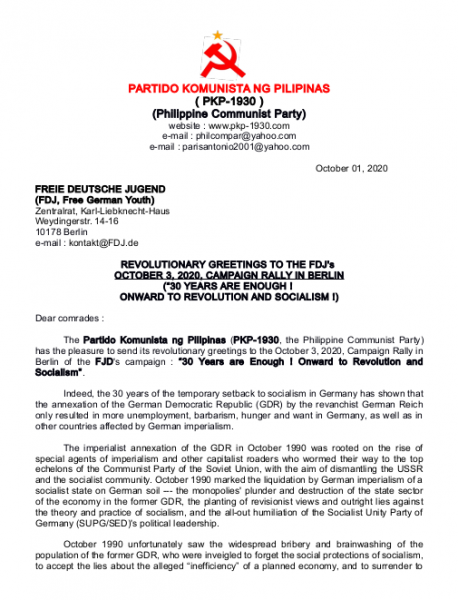 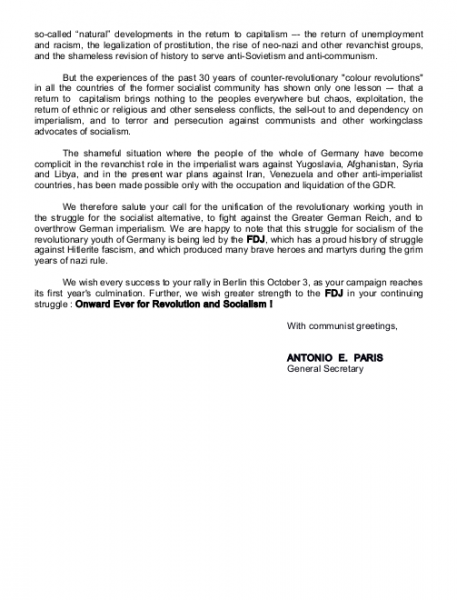 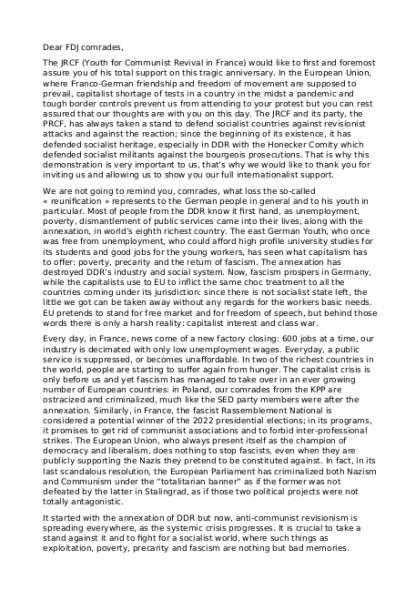 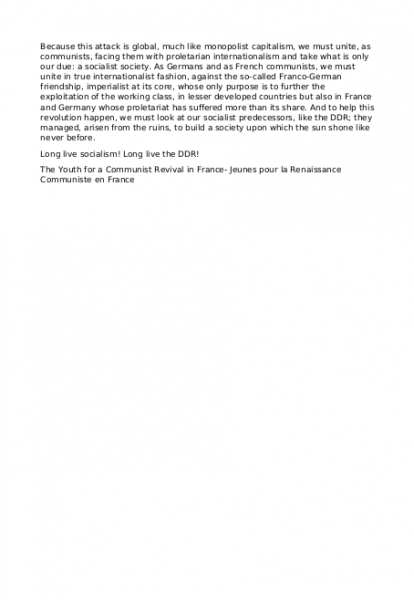 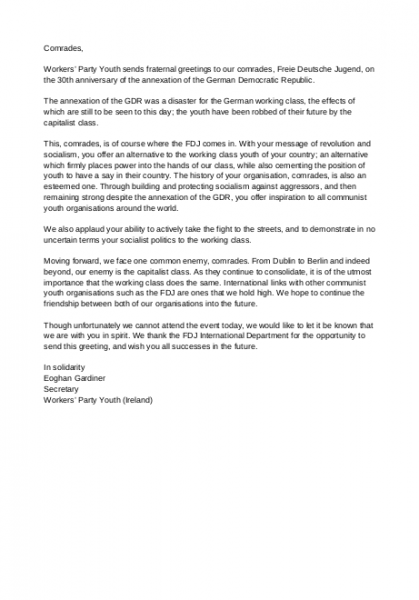 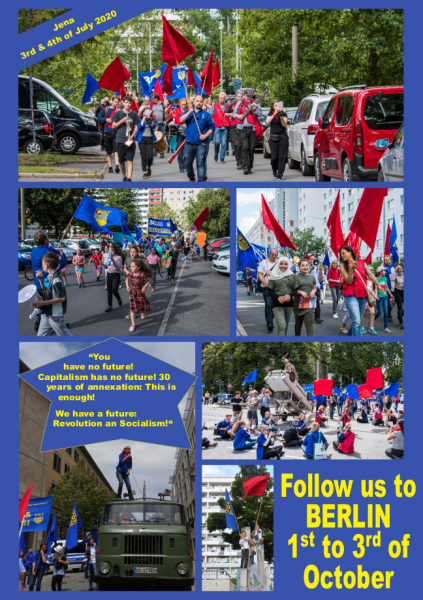 Every calm carries the storm and the closed door can stop no virus. We carry on! 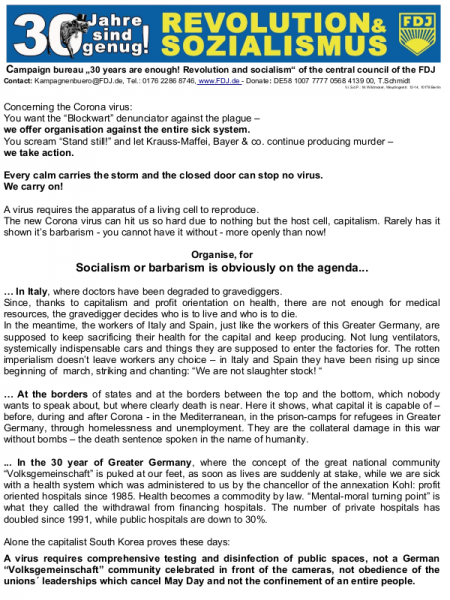 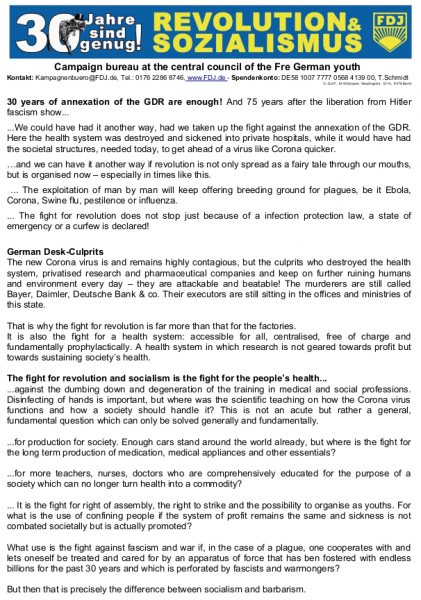 Demonstration against Fashism and War

Speakers will be: A representative of the FDJ, an apprentice and others

… a Trabi lying on ist roof

… the world renowned Hyena by John Heartfield as a greedy German

… Imperialism on the floor of the Trabi

… with Martin Luther in a German Flag on the bonnet

… Songs against fascism, war and liberation

… with a W50, emblasened with the words:

“Let us be realistic and attempt the impossible”

To prevent fascism, we must topple capitalism!

Erfurt, 5th feburary: a farce. The fascists of the AfD escort thomas Kemmerich, who had actually already stepped back, to the post of minister president. Planned and executed hand in hand with the right wing block of the civic camp, the CDU.

Thüringen writes history. Already in 1924 the fascists carried the right wing civic „Thüringer Ordnungsbunt“ into gouvernmernt. Non-conforming teachers were stripped of their posts, the Bauhaus fled to Dessau and the NSDAP nurtured itself in this same Thüringen until they could post their first fascist minister in 1930.

Civic Democracy fell apart and is doing so again. The outcrie appears great, while the Downfall, the emergency status of the Republik, has been going on for 30 years.

No, we did not have to experience this farce, it was in our hands. The wheel of history was handed to the workers and the youth 75 years ago – the red army of the soviet union gave the workers and youths in this country the possibility „to build themselves a good life under their own leadership“ (Bertold Brecht).

He who lets the wheel of history be taken back out of their hands will harvest the old wheel of those long dead. The old wheel, Germannes and Co, was already returning at the time of the German Democratic Republic (DDR). The foundations would have been there to never again permit the old greater Germany return. In spite of their antifascism, which we must hold high, the old voice grew ever louder, until the old fascists and the new could conquer the DDR 30 years ago. They did not hesitate.

As the FDJ, founded 1936 in exile against German fascism, we greet every demonstration against fascism – but we call for even more necessary immediate resistance which does not end on the sofa.

To end fascism, we must topple capitalism!

Stations of the campagne in Zwickau:

Workers Party Youth (Ireland) sends warm greetings and solidarity to the Freie Deutsche Jugend (FDJ) on this occasion, the 70th anniversary of the foundation of the German Democratic Republic (GDR)Today it is a most troubling time for socialist youth in eastern Germany. The re-emergence of fascism in recent years owes its success to the joint actions counter-revolution and imperialism of the Federal Republic of Germany.Workers Party Youth salutes the FDJ in these trying times. We ask our comrades in the FDJ to continue to struggle for the overthrow of capitalism and the construction of the new socialist and communist society. We send our best wishes and solidarity to the FDJ and the progressive youth of annexed German Democratic Republic. 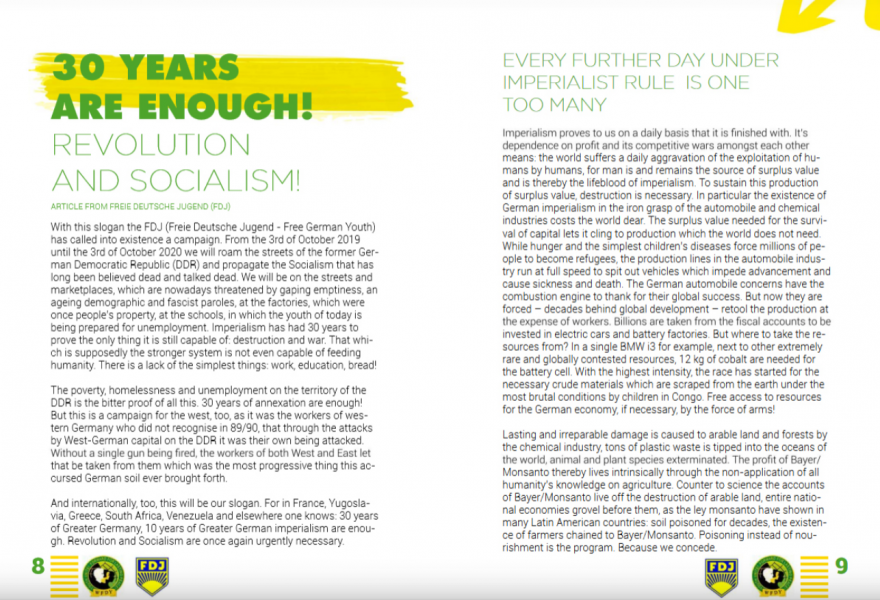 Pictures from the anniversary of the annexation of the DDR 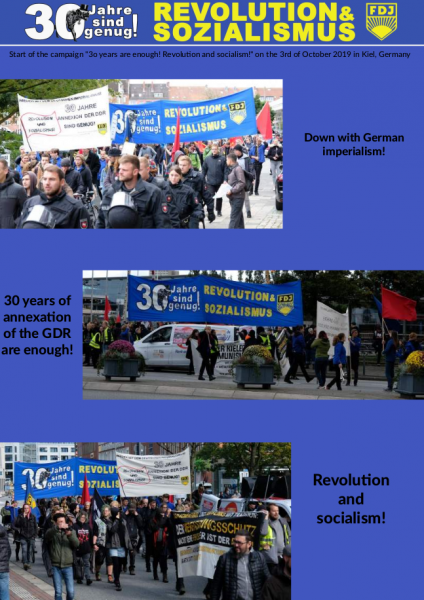