There is no solution in the capitalist system, but only a proletarian revolutionary solution

Here you find some of our documents in english, spanish, czech, polish and russian.

Programmatic Declaration of the Free German Youth in english language

Which side we are on - Declaration Central Council of the FDJ / March 8, 2022 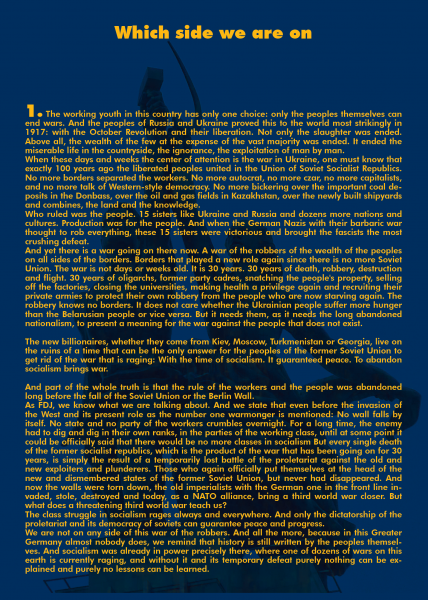 DECLARATION ON MAY 8, 2022
LET IT BE REMEMBERED
THAT THE LIBERATION FROM FASCISM AND WAR
CAN ONLY BE PRESERVED BY THOSE WHO DO NOT OPPRESS OTHER PEOPLES.

Let it be remembered: war against war. This basic attitude - never again fascism, never again war - this basic attitude, which was laid down in the Potsdam Agreement by the anti-Hitler coalition in 1945, did not last - despite the warning the German people had received from their own "traitors to the fatherland", who paid with their lives in the concentration
camps and Gestapo cellars, despite the fighters of the Résistance and the liberators on the side of the anti-Hitler coalition or in the Red Army. Despite the fact that they spared the German people from the threatened destruction by their own German war aggressor. And on top brought salvation to the German people salvation and its liberation from fascism
and war through an international war front, the burden of which was borne by the proletariat for the sake of peace in the world. For this the people of the Soviet Union, including 27 million workers and peasants, risked their lives and accepted their deaths: That never again fascism and war would emanate from German soil. That no nation, no country will be invaded and burned down again. "Never again fascism and war", this warning became reality through the people of the Soviet Union, through the liberation of all the peoples who suffered under German barbarism, by annihilating the German war canaille, the war producers, the German war criminal of monopoly capital and his fascist hordes, on their own soil. By a working class of socialism, which freed the German people from the crime and let them leave these everlasting war crimes of its bourgeoisie, and was able to do so.

Through the working class and the German people taking the path of peace by putting a stop to their own war aggressor, German imperialism, through their own liberation in a socialism on German soil. Which the German workers' movement was prepared to do and, with the help of the workers from the Soviet Union, turned a part of Germany into that part of Germany that helped secure peace in Europe for many decades by taking the path of socialism. Where the admonition "Never again fascism - Never again war" was made true. In contrast to the FRG, where the defeated monopoly bourgeoisie together with the war criminals and all the old Nazis in government and state made the war against peace, against the proletarians of the world and socialism a "peace" preparing for war on the still existing ruins of their second world war, the war, the renewed war production together with the army - whose personnel came from the Nazi army. And never stopped
the Eastland ride against all socialist countries. Neither against the own German people in the GDR, which was annexed by the German imperialism in 1989 and since then has been under the heel of the war aggressor. Or, as in the current Easland ride against all peoples who liberated themselves and as liberated must liberate themselves again. In order to live
in peace through the socialist revolution once again in their own country without the aggressors from the war alliance NATO, or under the German military boot and its war profiteers from capital and government, which occupy their countries since the 1990s. So their people of labor, whether proletarians, other working people or peasants live in the peace and prosperity that socialism guarantees them. As the German workers' movement has to defeat its main enemy, German imperialism, to join the side of all workers and peoples "Down with capitalism".

Let it be remembered: the proletariat in each country is a true great power - of peace, a power of revolution and peace in a new world of socialism, which can defeat any war aggressor of imperialism and its "new descendants", the oligarchs of the
counterrevolution. A war aggressor who would once again rather destroy the world in the war crime against the peoples in their barbaric wars which lead to a new World War, rather than hand it over to the mankind of work as a place of peace. Not shying away from genocide, not shying away from pushing billions of people into sheer misery in order to survive as a class of exploiters and oppressors. Every war of the bourgeoisie is a war against the peace power of the proletariat. A war between socialism and capitalism. Which urges and forces the working classes nationally, as well as internationally, to unite
in an anti-war front, a proletarian front across all national borders. To finally put an end to the murder of peoples and the destruction of everything their hands have created. And then no war aggressor can find a way any more to divide us, the workers in our own country, as well as against other workers of other countries, by discord, ill-will and to draw us to the side of the aggressor - instead of seeing in each one of them an enemy of the peoples' workers movement. Because: The main enemy is in the own country. And every main enemy of the warmongering powers is the enemy of every international anti-war movement of the proletariat.

We call upon you on the day of May 8 and 9, on the 77th anniversary - the day of liberation from Hitler's fascism:

Proletarians of all countries and peoples, unite!

Together we, "United Great Power of Peace", will beat these war aggressors. Who do not wage war alone against the proletariat and working people in Ukraine + Russia. And with it: Carry the war to the old Europe, which has already been twice reduced to rubble by the war of the capital of the imperialist and the monopolist warmongers. Not a third time. Like
all acts of war of these great powers - whether in Africa, whether in Latin America, whether in Asia. Putting a stop to their game of war by each people and each working class going its way of the revolution to enable them to establish a state of peace under socialism under the dictatorship of the proletariat or in the people's democracy, and do so.
So that we redeem:
NEVER AGAIN FASCISM - NEVER AGAIN WAR

Free Oleksandr and Mykhailo
Together against racism and nationalism

Declaration by the participants of the FDJ summer camp, August 2021

Download as PDF
Participants of FDJ – summercamp August 2021
In these times of the apparent victory of imperialism over
socialism.
In these times which in fact only show that imperialism only
brings crisis, further decline and destruction.
In these times when day by day the ruling class' way out -
fascism and war - is drawing nearer
- We - the FDJ, the JRCF, the SKOJ state -
The discussion and exchange about our positions and
struggles and the common action of the revolutionary youth
across the borders is needed more than ever.
Some days that taught us:
Cooperation must become even closer and more frequent. In
exchange, in discussion and in action. Our opponent is weak,
our strength is unity in internationalism.
Youth first, so that our generation may put into action:
What is our answer to war and fascism -
revolution and socialism!

Declaration of the Central Council at the turn of the year 2020/2021: Socialism is and keeps being the best prophylaxis 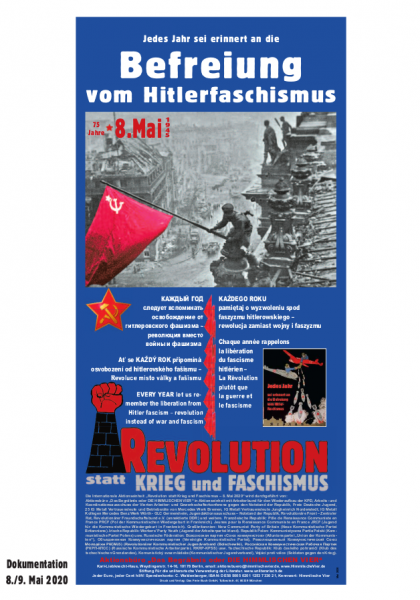 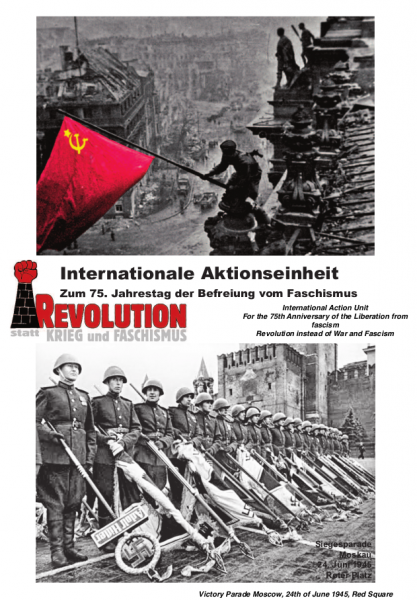 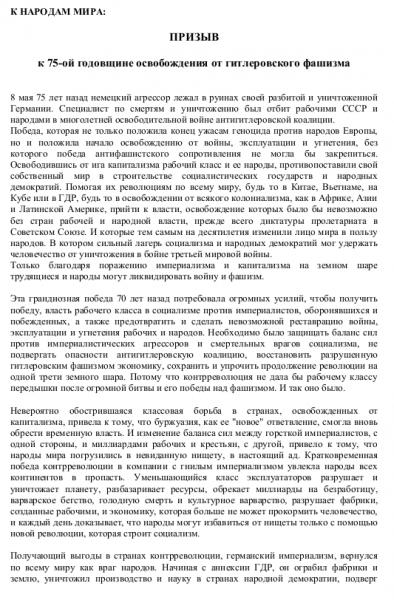 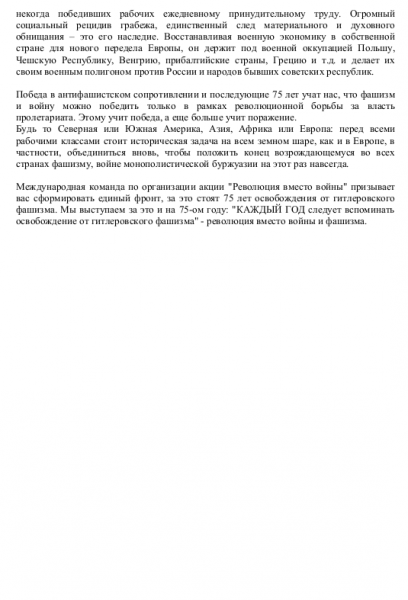 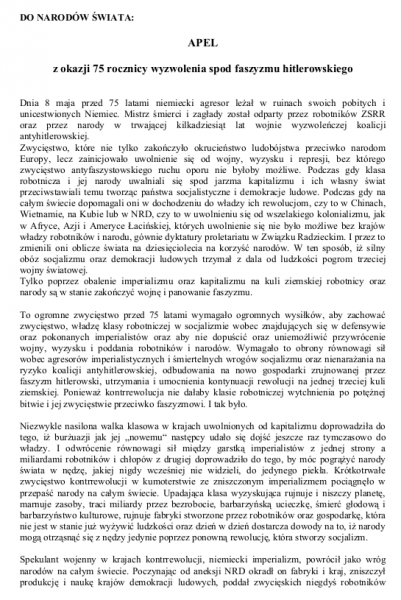 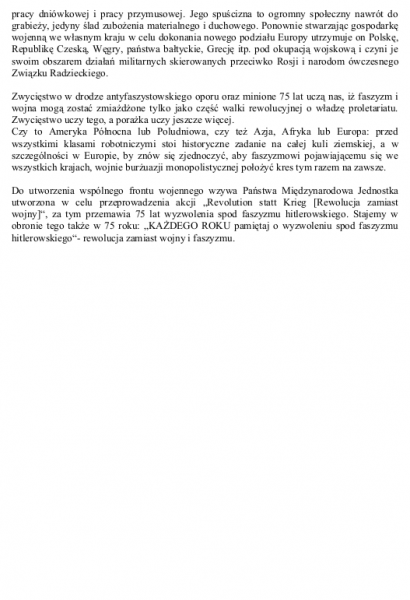 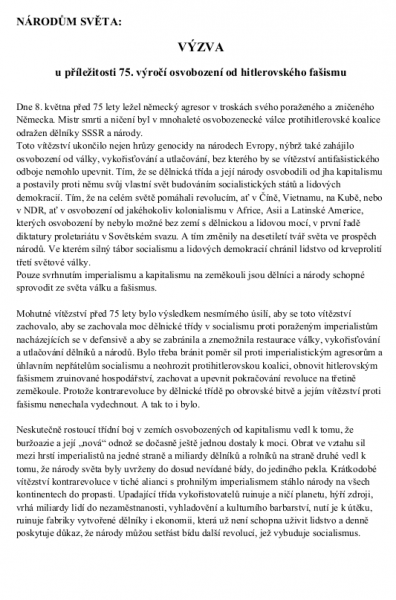 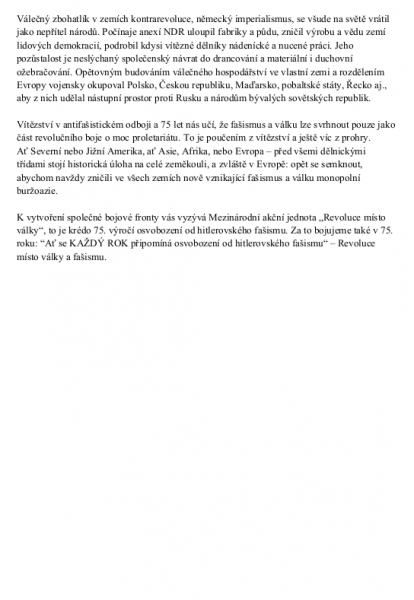 TO THE PEOPLES OF THE WORLD: A CALL on the 75th anniversary of the liberation from Hitler fascism 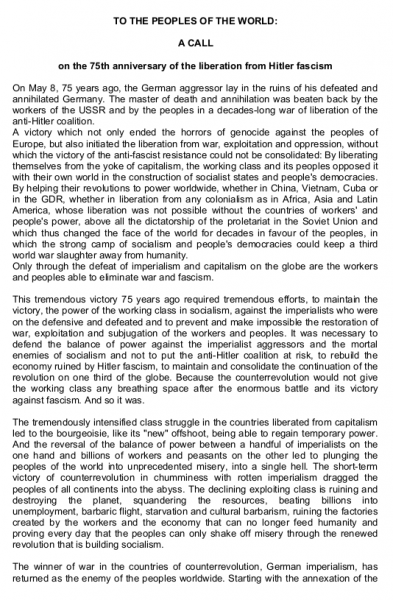 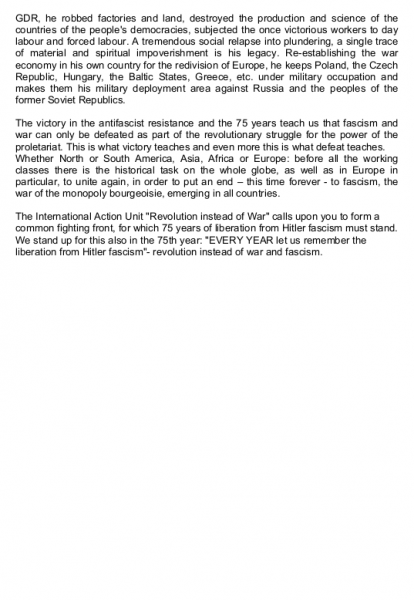 Over the past few days, we have discussed and learned about the history of the struggles of our class. We have been agitating in the city, in the trams and on the streets for the unification of revolutionary youth and the need to rebuild the Communist Party. The beacon, also for November Revolution 100 years ago in Germany, gave the Great Socialist October Revolution in Russia under the leadership of the Bolsheviki. This is precisely what the Russian working class was ahead to the German: the existence of a revolutionary leadership. From this arises for us the indispensable necessity of a communist party that leads and directs the struggles of the working class. Without its existence, no revolution can be victorious. In Germany, the KPD was founded only in the revolution, but only with it does the working class learn to lead itself, instead of following the betrayal of social democratism. It was the youth at that time who stood in the front row. "First clarity, then majority" was the urgent advice of Karl Liebknecht to them and must be our slogan today. In the class struggles of the Weimar Republic it was proven the need for Bolshevization of the Communist Party, the party Ernst Thaelmann's. The Hamburg Uprising made the bourgeoisie feel their death knell. Fled from German fascism, the antifascist youth drew the correct conclusion from Thaelmann's united front policy and, as it were, called the KJVD to unite in the FDJ. This call was followed, among others, by social democratic youth, young trade unionists, Christian, Jewish and organised youth. In the fight against war and fascism and for a socialist future, his statement "There is no solution in the capitalist system, but only a proletarian revolutionary solution" must then and now be the constant maxim for the struggles in the educational institutions, in the enterprise, in the districts and in the unions.

» english: Declaration concerning the coming World Festival of Youth and Students 2017 in Sochi/Russia

» 100 years after the October Revolution: Forward for another Red October!

on occasion of the anniversary of

the liberation from fascism and war

Documents towards the 18th World Festival of Youth and Students in Quito, Ecuador (2013)

Nobel Peace Prize not for germany!

The European Union was receiving this year’s Nobel Peace Prize. However, the EU is only a temporary alliance among imperialist powers: “The United States of Europe under capitalist conditions is either impossible or reactionary.” (Lenin 1915) As temporary their alliance is, as temporary is their peace. The peace is especially threatened by German imperialism. Germany has provoked two World Wars previously; they murdered, plundered, and devastated Europe. For 67 years, the Federal republic of Germany has not concluded a peace treaty yet. Up to this day, the FRG has not paid any reparation and has not acknowledged their war crimes. The victims have not been compensated and the offenders have not been punished.

» The Crimes of German Imperialism in South Africa

» The History of the Free German Youth

» The Annexation of the German Democratic Republic

» Incompetence of Capitalism and the Necessity for Socialism

» The Crisis of Capitalism and the Socialism